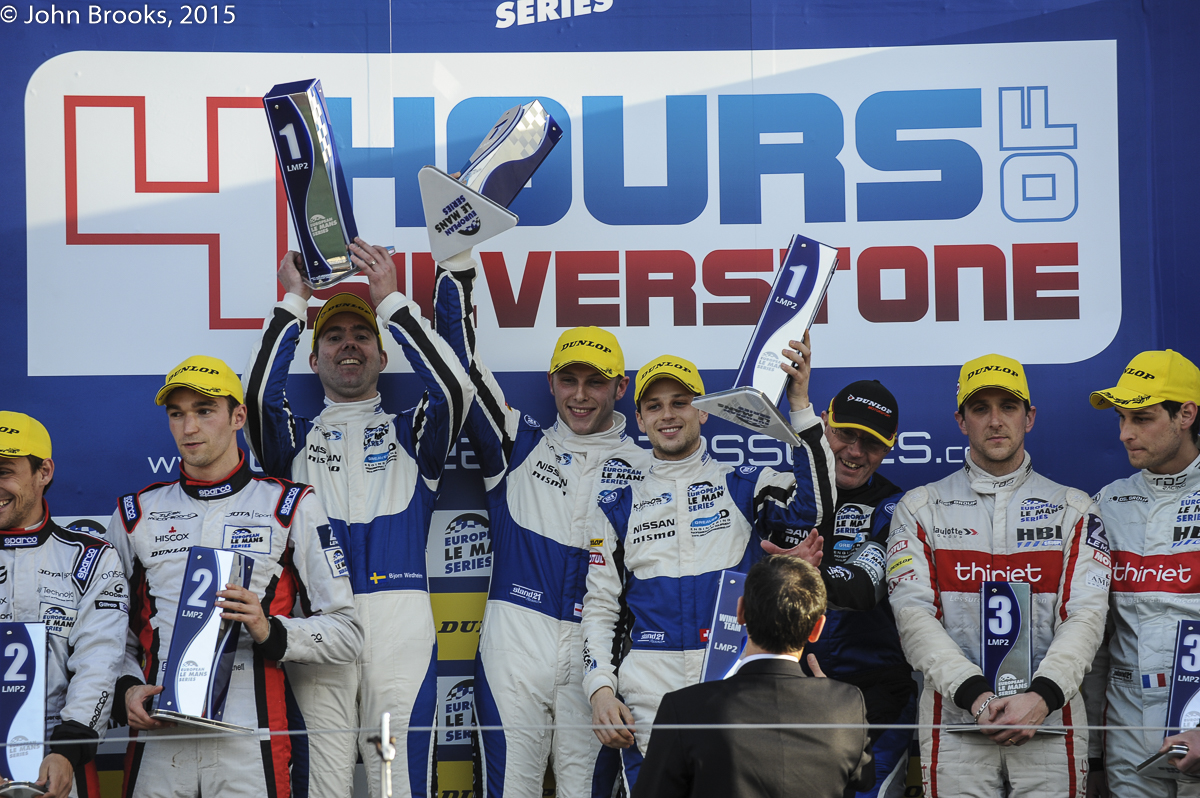 Greaves Motorsport Secured by Kairos Technologies took a narrow, but worthy maiden victory for their partnership in the 4 Hours of Silverstone, the opening round of the 2015 European Le Mans Series.

Starting from Pole Position, drivers Gary Hirsch, Bjorn Wirdheim and Jon Lancaster all put in very strong stints to score a memorable win in the team’s Nissan-powered Gibson 015S against the strongest and most determined opposition.

Capitalising on the stunning Qualifying lap the Jon had produced to head the grid Gary drove the opening two stints and put in one of the performances of the day.

He easily twice set the fastest lap of the race on that initial phase to give Bjorn a comfortable lead of over 20 seconds at the first driver change. The very experienced Swede encountered a few problems during his time behind the wheel, a combination of a badly timed Safety Car period and a mechanical issue with the front third-element shock absorber eroded the hard earned advantage that Gary had accrued.

This transformed a comfortable run to the flag into a real scrap for victory. Jon rose to the challenge in an electrifying drive that saw him catch and pass two rivals in his final stint to take the chequered flag by the tiny margin of 0.307 of a second, to leave the whole team breathless and delirious in equal measure.
Tim Greaves, Team Principal of Greaves Motorsport Secured by Kairos Technologies.

“That was one of the most exciting races I have ever seen, a flat out sprint for four hours, our drivers did all that was asked of them and more. Gary gave us the best possible start and set the foundations for success, Bjorn coped with difficult handling and the untimely intervention of the Safety Car but we were still in contention at that point. Jon’s stint was extraordinary by any standards both in pace and race-craft.
“To win first time out in our partnership with Kairos Technologies was a dream as was giving Gibson their debut victory. I must also pay tribute to our engineer Paul Thomas, who was responsible for the technical side in our Championship and Le Mans winning season in 2011. He has returned to the team and has painstakingly worked on the set up with the drivers to create the optimal package, the proof of this was evident in Gary’s stints as he was consistently the fastest on track.
“We are very pleased to be back on the top step of the podium but even as we celebrate we know that there is a lot of hard work ahead if we are to maintain this position.”