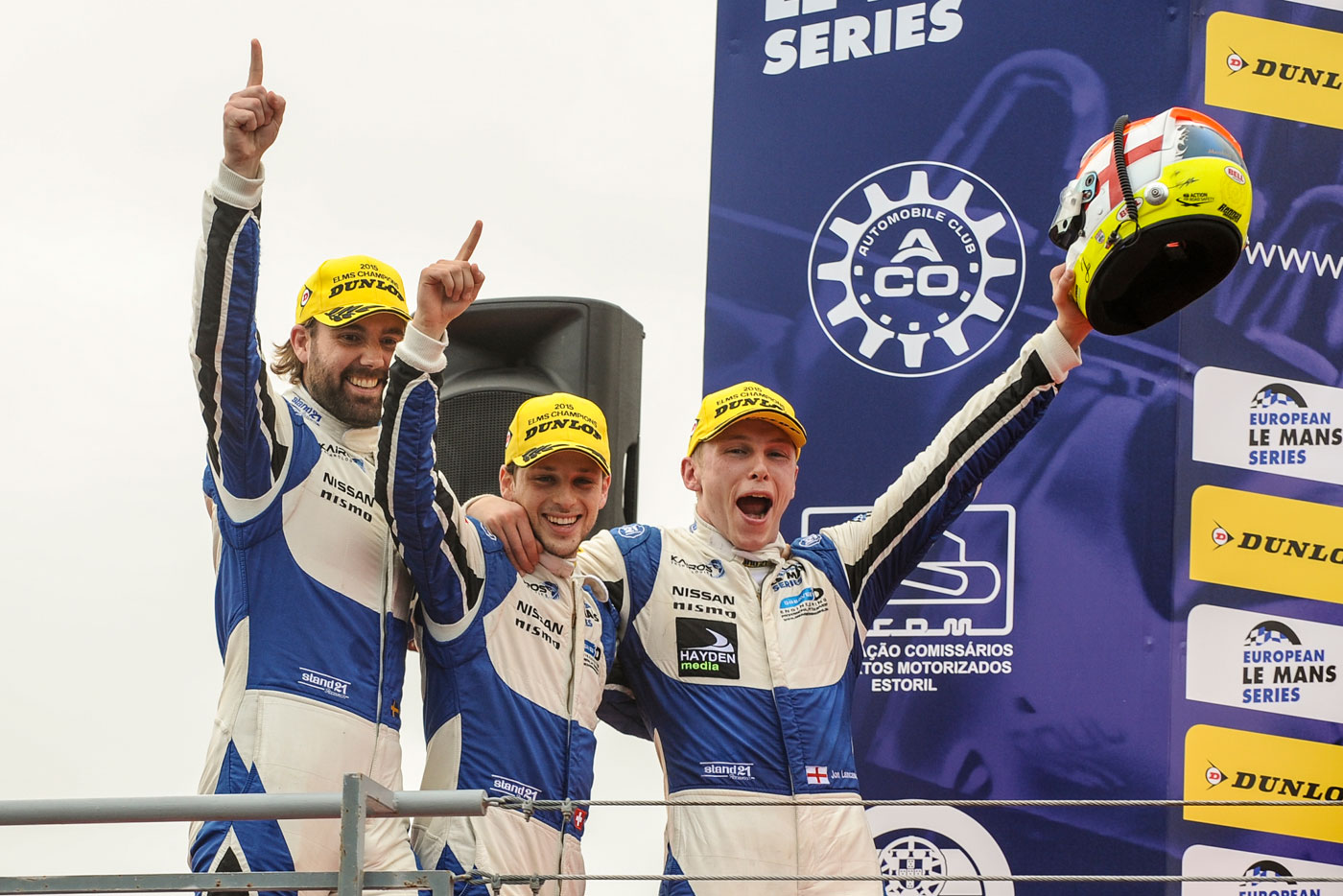 The 4 Hours of Estoril was a race filled with incidents from start to finish and the result was hard earned by the whole team, overcoming several obstacles to their title aspirations.

Jon Lancaster posted the second fastest time during Qualifying but on a subsequent lap he was adjudged to have slowed insufficiently in a Yellow Flag Caution Zone. The team received an eight place penalty on the grid as a result, making their task of winning the titles even harder.

Björn Wirdheim drove the opening stint in the team’s Nissan-powered Gibson 015S prototype and skillfully avoided spinning cars on the first corner. Wirdheim steadily worked his way up to the leaders handing the car over in third place.

Gary Hirsch was next in and faced conditions that, at times, were as difficult and challenging as can be imagined, with monsoon-like deluges flooding the track causing many competitors to lose control. Hirsch continued with his team-mate’s good work taking the lead before his first pit stop. The weather continued to be treacherous but Hirsch coped well handing the car over to Jon Lancaster for the run to the Chequered Flag.

Lancaster had the situation under control but the Officials noticed that on his final pit-stop Hirsch had released his safety harness prematurely, in contravention of the regulations. The Stewards imposed a Stop and Go Penalty that the team elected to serve immediately.

Lancaster got the car back on track with just enough time to spare and drove on to the finish, crossing the line after four hours of non-stop action, scoring enough points to secure both the titles.

“What a day, what a race. This championship win, our second, was amazing, I don’t think any other team has matched that achievement,” Greaves said.

“We had our up and downs, any of the three top teams could have won it, things really went down to the wire. With about 20 minutes to go I didn’t know where I was, we struggled to think straight on the pit-wall.

“That demonstrates that were were emotionally involved and stressed, we had a few run-ins with the Official but………. What it means to the team is that we are back up where we belong, we have won races, we have won at Le Mans and now we have another championship.

“Björn, Gary and Jon stuck to the plan we had before the race and we all coped well with the changing and challenging conditions. The guys on the team were particularly sharp today at the pit stops, the reward for the hard work and practice in the run up to the race. We are looking forward to a light celebration tonight and then planning our 2016 campaign.”

“A great way to round off a great season. What a race that was, keeping us all in suspense till the final lap, but we did it, our second title,” Greaves said.

“For this we have to thank our partners, Gibson Technology, Nissan, Dunlop and Kairos Technologies who have given us the platform to build this success. I must pay particular tribute to the guys on the team, their pit-work today was fantastic.

“Björn, Gary and Jon drove really well in very difficult circumstances, Paul Thomas did another great job today engineering the car. Greaves Motorsport is both a team and a family, today we saw how those qualities were rewarded with success, I hope we will continue with this in the future.”