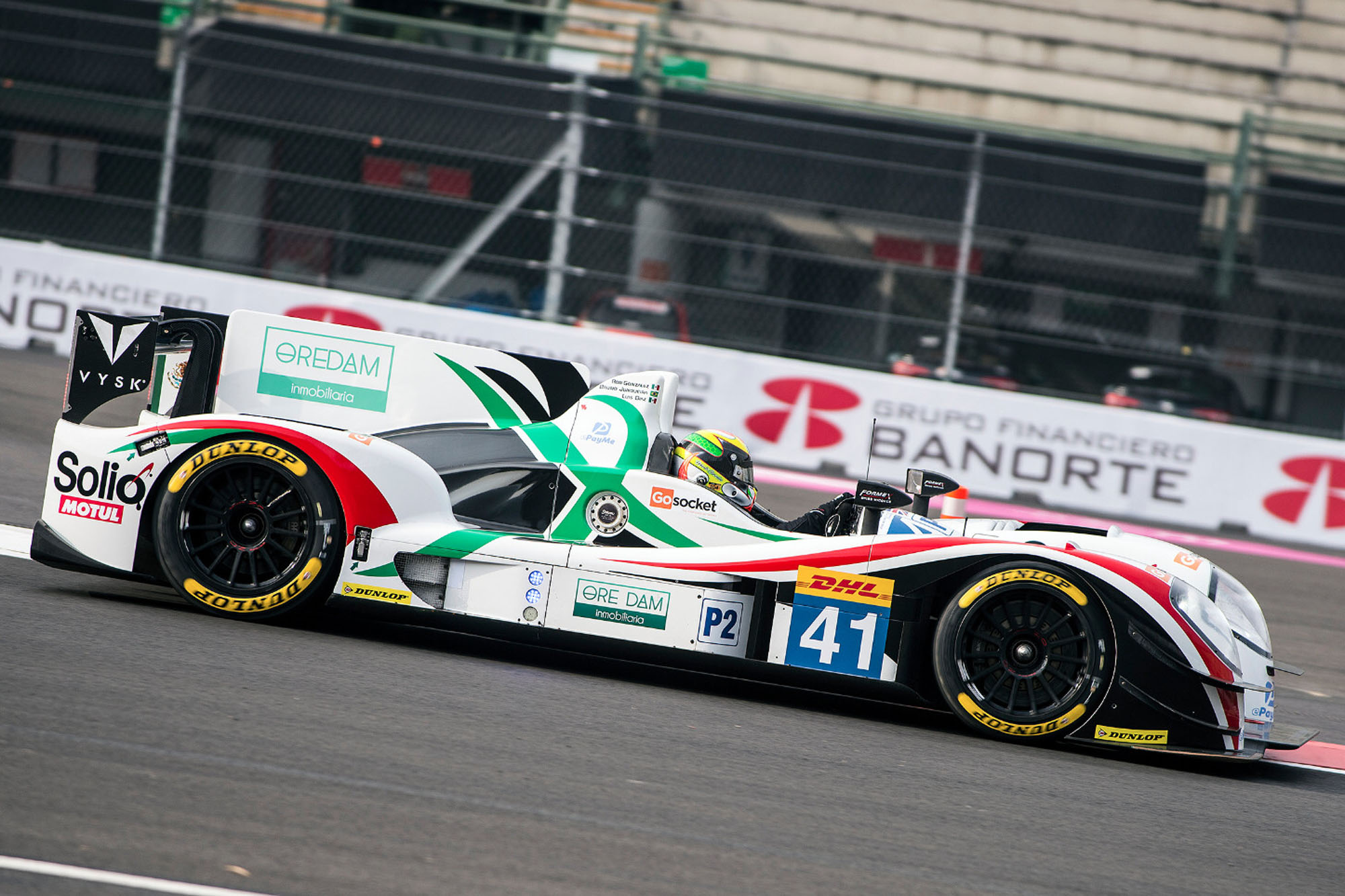 MEXICO CITY, Mexico (August 31, 2016) – Greaves Motorsport will kick off its return to the FIA World Endurance Championship this weekend in Mexico City with a pair of local heroes and a former Indy 500 pole winner ready for battle.

Fresh from competing in the Circuit Paul Ricard round of the European Le Mans Series last weekend, Greaves Motorsport will contest this weekend’s FIA WEC round with with experienced Mexican drivers Roberto Gonzalez and Luis Diaz plus Brazilian ace, Bruno Junqueira.

The trio will pilot the No. 41 Vysk / Gosocket / ePayMe / Formex / Soliq / Oredam entry – the Nissan-powered Gibson 015S chassis – at the 4.35 Km. circuit of the Autodromo Hermanos Rodriguez.

The Greaves ELMS-championship winning Gibson chassis one of only two open cockpit cars competing in the LM P2 class this weekend in Mexico.

“We are very excited to race here for the first time at the WEC’s debut here in Mexico,” Greaves Team Principal, Jacob Greaves said.

“It’s exciting to go to a new race and we are looking forward very much working with Roberto (Gonzalez) again after he raced with us in 2012 in Brazil, plus Bruno (Junqueira) and Luis (Diaz), who have been team mates before.

“The test we had in Monza was very successful, we think we have a very competitive chance in the WEC. The car is good, the chassis is good, the drivers are good and they get along well – the team is very experienced and we hope to perform well”.

All three Greaves drivers this weekend have prior experience competing here in Mexico City in the Champ Car World Series.

“Mexico is a very different track in comparison to other tracks we have been to, such as the altitude we run at, but Bruno, Roberto and Luis have some experience racing at the circuit from their Champ Car days,” Greaves said.

“That could be an advantage, even though the layout has been revised since the last time they raced here, the circuit looks great. The grandstand baseball stadium section of the circuit looks very interesting –  we should hopefully have a good fan following with the local stars in our team.

“The Gibson chassis is a very good car and works well at all the circuits we have been to. I think this could be an advantage for us as the chassis is a good match with a good team and a good driver line-up.

“This can maximise the full potential of everything – the strategy, pit stops, the consistency between all three drivers – we should have a very good balance for the race. All the elements have to work perfectly to win and the chassis plays a part, but it’s a part of a much bigger picture.”

DRIVER QUOTES
Roberto Gonzalez
“I want to invite the fans to come and enjoy this great event, this is the most important endurance championship in the world. There will be Mexican drivers and also major car manufacturers. We are presenting a good Gibson-Nissan combination. We don’t have the fastest straight line speed because of the aerodynamics, but it doesn’t wear out the tyres as much as other chassis and it’s very stable, especially in the rear.
“Being a new track, it isn’t used a lot, so that’s why we think there won’t be a lot of grip. That could also help us with the car that we have”.

Bruno Junqueira
“I have great memories of Mexico, I won a race in Monterrey and I won pole positions and podiums in Mexico City. The Mexican fans support me and make me feel at home. I love the food, the track and the people and I think we can do a good race and we can represent the Mexican team very well. I am very honoured to be in this line up with Greaves Motorsport and I hope all the fans can cheer for us to have a good race.
“I’d like to see our Mexican friends supporting the race and I know they can do it, as I have seen it before when I raced Indy Cars in Mexico City, they were incredible. It was the most exciting race of the year because of the huge crowd. I hope I see them again”.

Luis Diaz
“To return to the track is a lovely feeling which instead of putting pressure on me, motivates me. Mainly as it is an iconic place (Autodromo Hermanos Rodriguez) for me as it is where I got my last victory in the Grand-Am Series. Last time I raced here we won a historic race that was very difficult because I had a lot of pressure. I was the one who asked the team to take the finish and I was able to make it a great dream come true: winning in my country. I remember they took the car to the Independence Angel (Monument) and it was a day I will never forget.
“It is great to return here in a series that I’ve always admired very much and I wanted to be a part of.
I’m joined by great drivers who are great admired such as Roberto and Bruno, it’s incredible!
“I’m looking forward for race day. It’s going to be a very special day that I’m going to enjoy, with a lot of people who have been supporting me.
“For sure there will be family, friends, and a lot of people who are coming to support us, mainly to the teams and Mexican drivers such as Roberto (Gonzalez), Ricardo (Gonzalez), Picho (Toledano) and me. I think we are going to enjoy it a lot”.
“My last races in the American Le Mans Series I fought against Bruno (Junqueira). I respect him and admire him very much. He was one of those drivers that when I saw his race times, I used to say: ‘How does he do it? Now, I’m going to see how he does it. I think we are a good complement to each other and we get along well, which is something that’s important. With Roberto, before we were drivers, we were friends, and we made our debut in karting in the same race. Therefore, I think with all of these things it’s going to be a very special team.”